Please be patient for a just a little longer! The Château de Villers-Cotterêts will soon be ready to host the Cité internationale de la langue française, following major restoration and development works. Take a look behind the scenes of this extraordinary project. 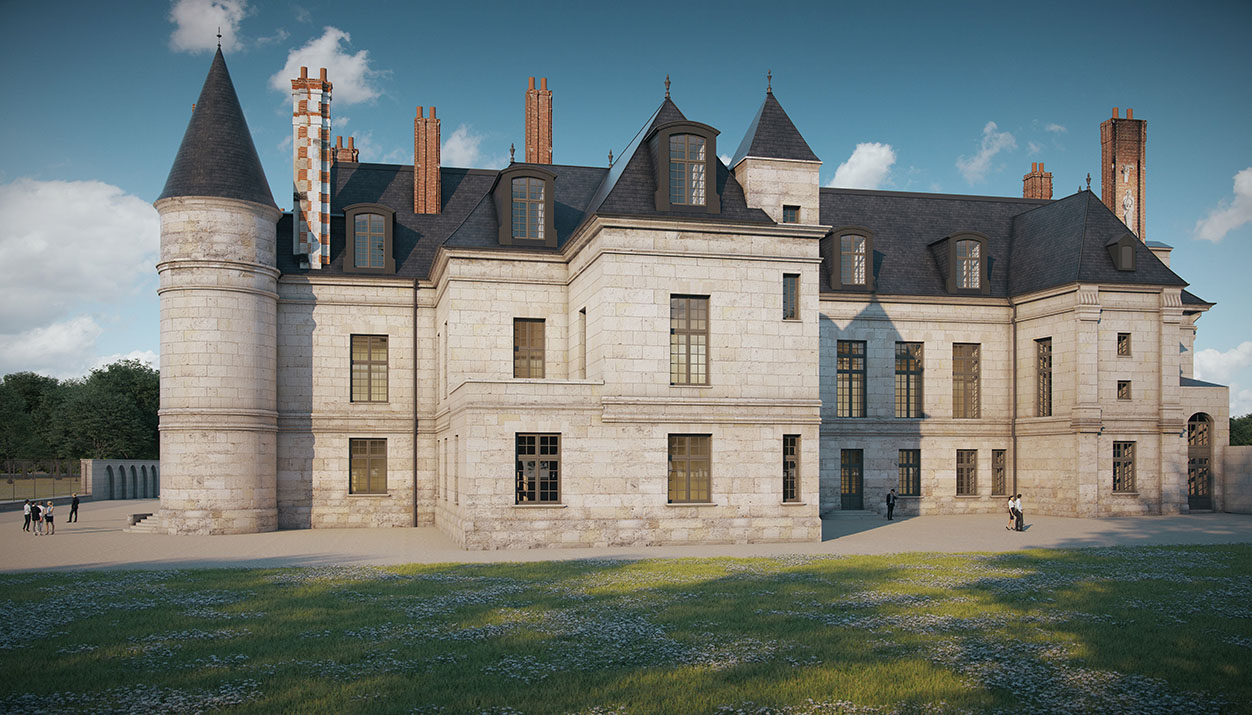 The Centre des monuments nationaux, which has coordinated the project, entrusted Olivier Weets, chief architect for historical monuments, with the task of implementing it.
His mission? To lead the restoration works, to document the château’s history, to clean up the 16th century sculptures, and to restore the floors, roofing and Renaissance staircases using age-old know-how.
The agency Projectiles* – which had previously worked on the Château de Fontainebleau, the Palace of Versailles and the Saint-Malo maritime history museum – was entrusted with the task of overseeing the interior developments and design of the permanent visitor circuit on the French language.

*Projectiles is the representative of a consortium also made up of TPF Ingénierie, Altia, Changement à vue, CL Design, Lundi 8, and 8'18’’. 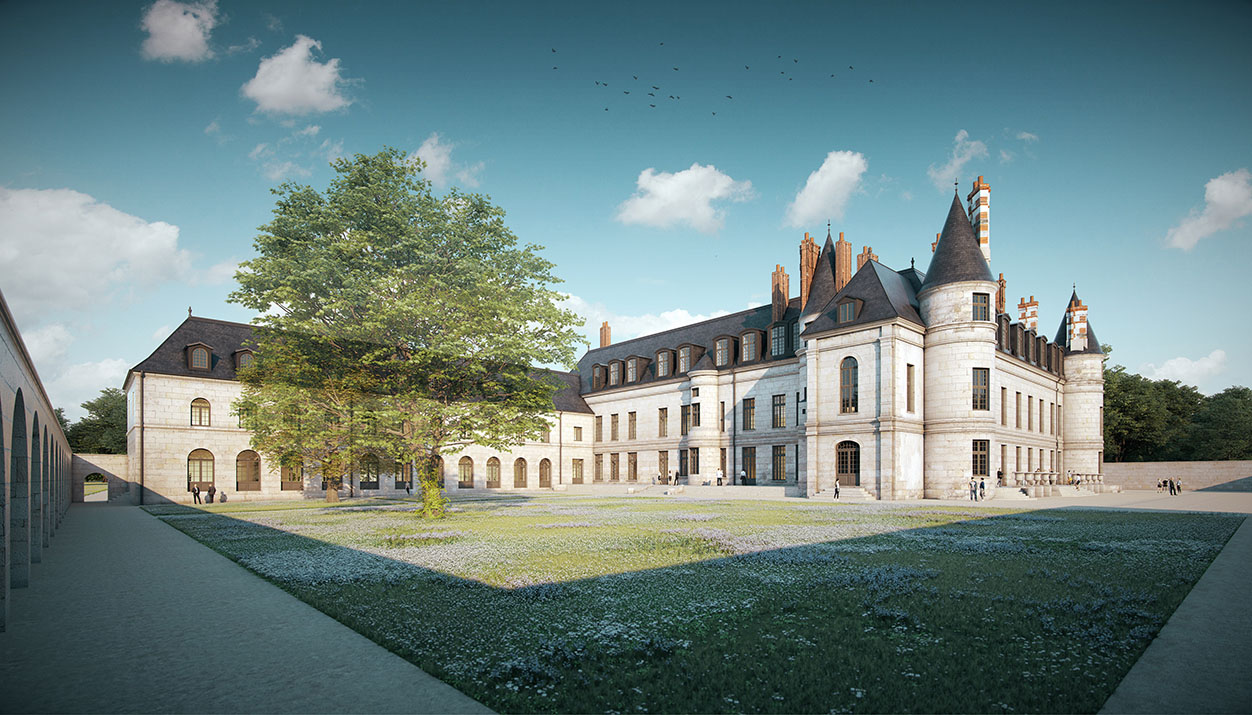 Artist’s impression of the north-eastern corner of the Logis Royal from the Queen’s garden © Olivier Weets Architecte SARL, chief architect for historical monuments

The operation is organised into four phases: 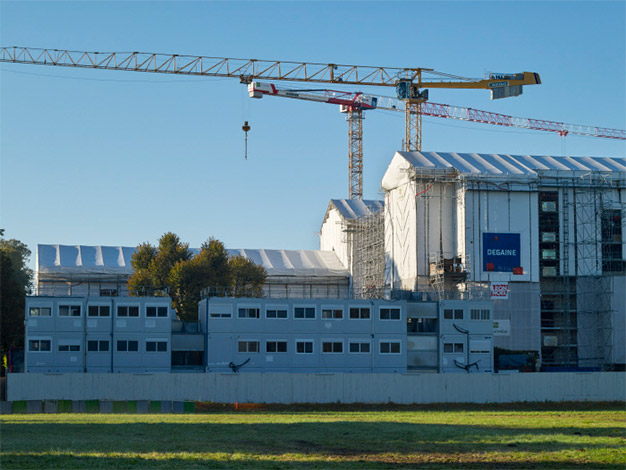 Resurrecting the past: the decision to restore

The restoration works focus on the original Renaissance features and contributions from the 17th century and especially the 18th century that saw the site listed as a historical monument in 1997.

The project thus seeks to highlight these architectural features, including: 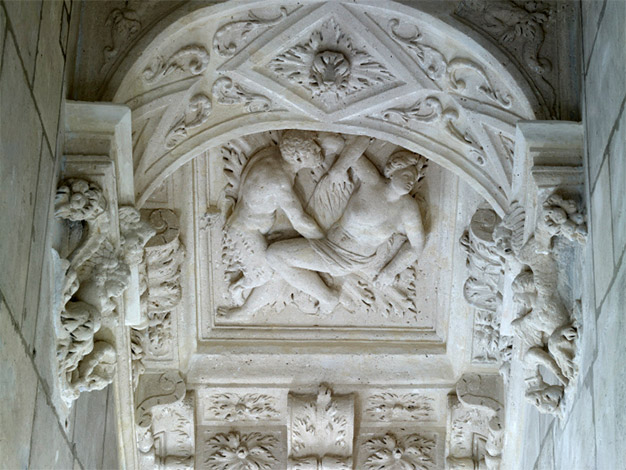 Adaptability and versatility will be the keywords of the future spaces of the Cité internationale de la langue française! These spaces can thus be adapted to the pace and needs of the programme and can host a large number of activities. The auditorium to be fitted out in the Jeu de Paume building will be a multi-purpose venue with different possible configurations (flat, 150 seats, 250 seats), while the residency workshops on the second floor of the royal apartments will be used to host all kinds of artistic practices. 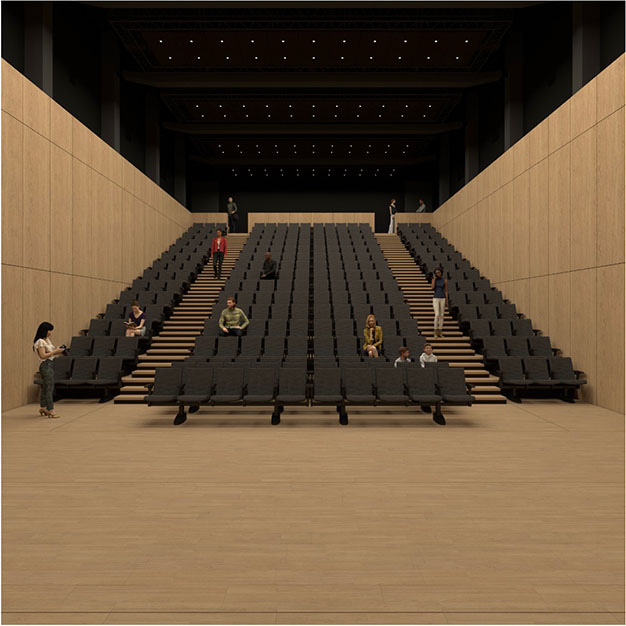 Sketch of the auditorium © Atelier Projectiles

Get ready for a spectacular sight! Nestled in the heart of the royal apartments, the Jeu de Paume court, capped with a large glass roof, will form a central zone – an agora-type hub from where the different activities in the Cité internationale de la langue française will lead off on the ground floor (temporary exhibitions, the gift and book shop, educational areas, the café-tearoom, etc.) and which can also be used for cultural events. 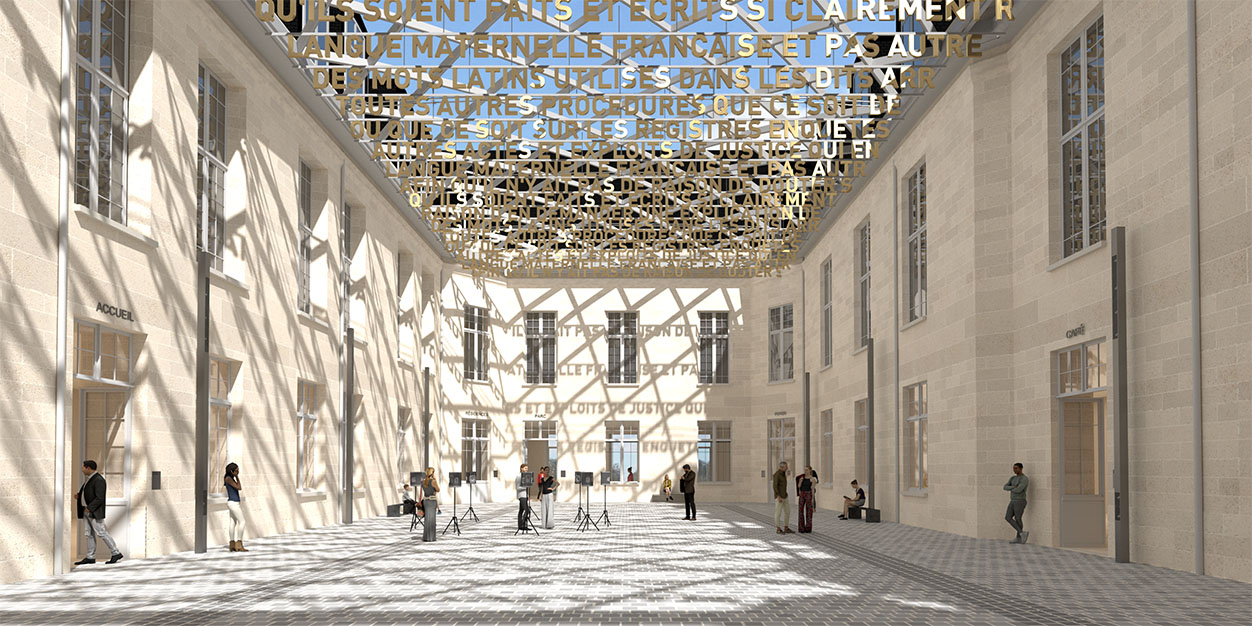 This glass roof was designed by Olivier Weets. It will be completed with a ‘lexical sky’ produced by the Atelier Projectiles and made up of a collection of hanging words that cast shadows by day and are illuminated by night. The inhabitants of Villers-Cotterêts and future visitors to the Cité internationale de la langue française contributed to the choice of words as part of participative workshops. Through this creation, language is invited to take over the court entirely and infuse the building’s main section.

This contemporary creation is cleverly positioned and will blend harmoniously into the edifice: invisible from outside the royal apartments, and leaving a clear view from the attic. 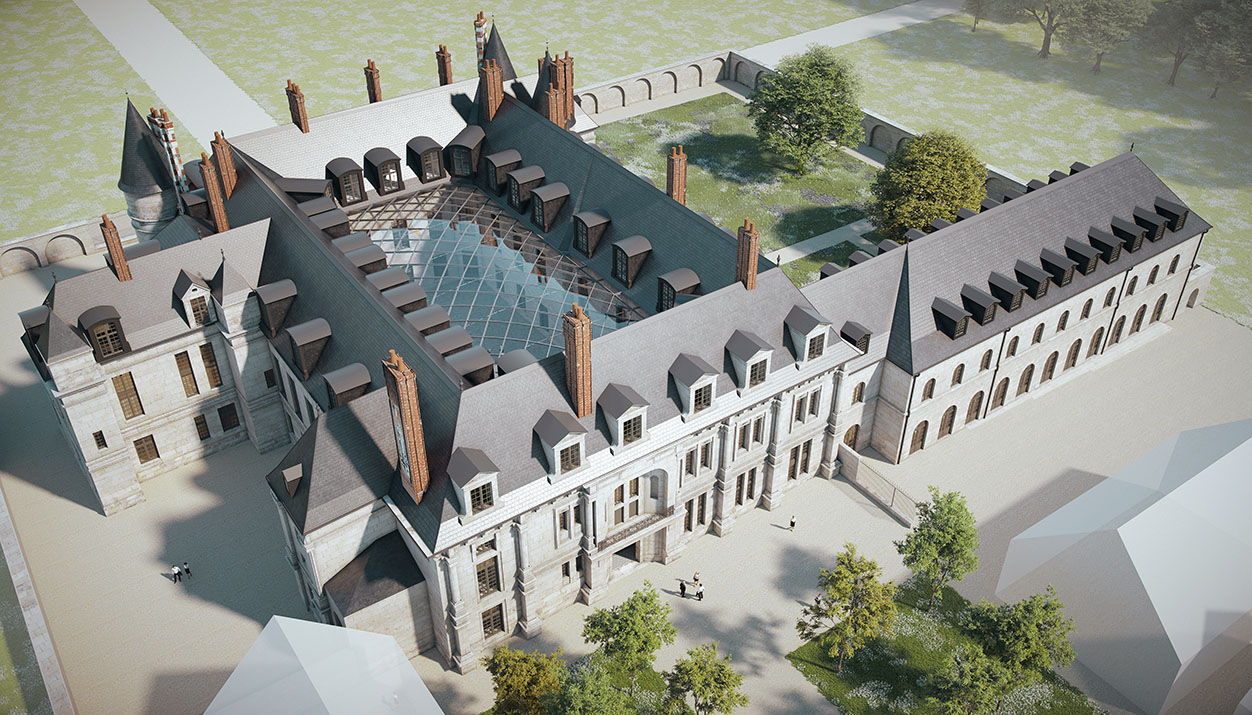 An edifice open to its surrounding area

One of the aims of the architectural project was to reopen the monument up to its environment by creating a walkway through the site. Thanks to this bold urban development decision, which revives the site’s original architectural purpose, local inhabitants and visitors will be able to walk freely across the site on its southern side to reach the town or, on its northern side to the Forest of Retz, which King Francis I loved so dearly.

Has this presentation of the project whet your appetite? Then come and discover the Cité internationale de la langue française in a few months! In the meantime, click here to find out more about the future visitor circuit and the many surprises that await you at Villers-Cotterêts.